February 11th was our single day in Jaipur, and we really made the most of it, although in a future trip I’d like to spend a lot more time exploring Rajastan. Our guide, Seema, met us bright and early and we drove through the old city for a glimpse of the Wind Palace on the way out to Amer fort.

Built in 1799, this attractive yet strangely lacking-in-depth building is essentially a free-standing facade so the ladies of the palace had plenty of windows through which to observe the outside world. 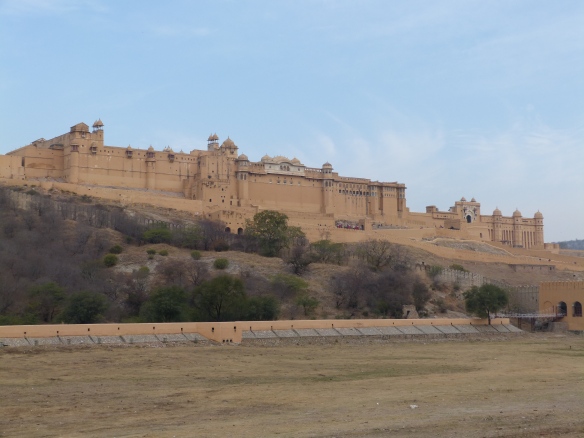 Arriving in Amer, the custom appears to be that you ascend to the fort via either elephant or bone-shaking jeep, and having opted for the latter we clung on as we rattled our way through the narrow streets up to the entrance.

Safely back on two feet, we spent a little while enjoying the first courtyard, watching the elephants stroll in with their passengers, and all the various tourists milling about.

Heading further into the fort itself, it quickly became obvious that this is a beautiful and fascinating place. The fort was the home of the Rajput Maharajas from the early 1600s onwards, and successive occupants contributed to the expansion of the whole.

Having left the fort and rattled our way back down to the main road, we happily transferred to the comfort of our regular car for the ride back into Jaipur, and were charmed to pass several elephants being walked home along the main road from the fort. (It was lovely for us to see them, anyway, I’m not quite sure how pleasant it is for the animals themselves…)

After a brief diversion via a fabric workshop, our next stop was the city palace, created when the maharajas moved their court from Amer in 1727 (the site was a former royal hunting lodge, apparently). The royal family still lives in part of the building, but a good amount of it is open to the public. 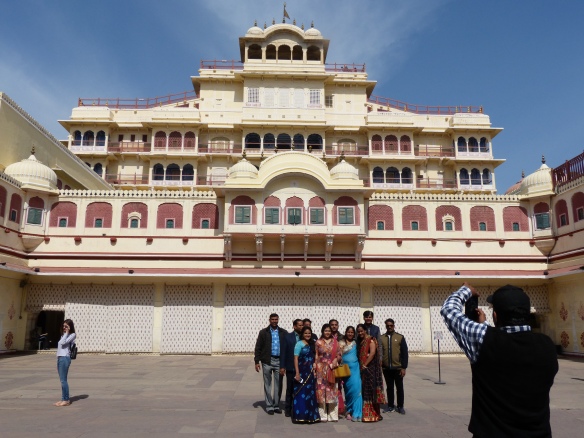 Once we were done with the palace, it was a quick step across the road to the Jantar Mantar observatory. This fascinating site was completed in 1734 by Jai Singh II, and contains various instruments to measure time, planetary movements and so on. 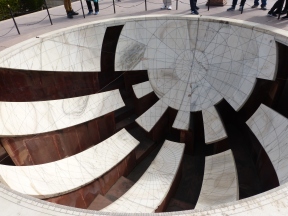 The largest gnomon sun dial in the world, accurate to within 2 seconds!

My one regret on the trip is that we didn’t make time for a stroll around the streets of old Jaipur, as it looked fascinating. Instead, however, we drove out of the city to the so-called monkey temple.

Walking around the semi-derelict site with our “Monkey master” was an interesting experience, although I became increasingly fed up with his insistence that we have the monkeys jump all over us. Tom, however, was perfectly happy to make some new furry friends, and reportedly enjoyed the experience.

Back in the city, it was only around 5pm but having skipped lunch we were starving. Raj (our excellent driver) took us to a restaurant he recommended, Aanandam, and upon entering we were struck with dread – it was completely empty. We were “those” tourists dragging the staff away from their pre-service tea… Happily the manager spoke excellent English, so I was able to order aloo gobi and daal without ghee, and it was all absolutely delicious.